I have been on a quest for the spiritual in art in our time for 30 years. A quest is the pursuit over a lifetime of the answer to one question. The answer (at least a thread of it) comes through a process of listening to outer voices and inner messages.

In October 2009 a word, not unlike a star shooting through the sky, fell into my heart/mind where it ignited a fiery exploration. POIGNANCY. The 'word' came through Buddhist teacher Stephen Batchelor, who proposes that poignancy might be a better translation of dukkha, the Pali/Sanskrit word usually translated as suffering. Trying to grasp Mr. Batchelor's rich thoughts on the subject, I jotted down in my notebook, “Touch something deeply/ Poignant/ Aesthetic appreciation.” To cultivate my understanding of dukkha, I transcribed the full passage from the Upaya Zen Center podcast. (A central tenet of Buddhism is life is dukkha.)

“Fully know dukkha, turn into it. It's about focusing our attention into the heart of darkness, into the heart of the world. As we do this and as we deepen our embrace of ourselves and of the world, we become more conscious of everything changing, shifting, moving, nothing stands still. There is nothing we can cling to to give us some sort of permanence, it's not going to work. As we deepen our experience, we become more aware of an extra poignant quality. This is why I want to get rid of the word suffering. When we look at suffering we also get in touch with something poignant. I like the word poignancy. We open up to another aesthetic appreciation of life. Some of those beautiful moments which we as a culture we admire are rooted in a sense of the tragic, like the great plays by Shakespeare: King Lear, Hamlet. These are not spin-ball romantic comedies. When we witness these works of art, we experience what moves us most deeply, what is most beautiful, and yet it is also inevitably tied in a sense with what's most tragic about the human condition, to the very core of our human condition. Beauty and dukkha do not contradict each other.”

Feeling an instant resonance upon hearing these words, I added in the margin my own question, AESTHETICS OF POIGNANCY?

What to do with such a resonance? First let it 'vibrate...' By that I mean I let it dwell within myself, simply notice where the energy takes me. A few months later, I got a remarkable echo. I had been invited to participate in MEANDER, an exhibition celebrating the Santa Fe river. To describe “River's Call,” the installation I created for the 8' x 5' space assigned to me in the group show, the reviewer used one adjective, and it was “poignant.”

“...The river has already been the focus of attention by artists like Dominique Mazeaud, who began her project of cleaning the river's banks and its riverbed over twenty years ago. (“The Great Cleansing of the Rio Grande.”) Some of the objects Mazeaud collected in her performance-based project - things she tends to think of as gifts from the river - are part of her poignant installation at Meander.” (Diane Armitage, THE Magazine, June 2010.)

When such 'direct' response is given, I take it as a cosmic affirmation, a sign that it is the right thing for me to be pursuing.

In “The River's Call,” I tried to capture the emotions the river awakened in me. Doing the piece every month for seven years, they were many. Was it a new kind of feeling? Rivers were not totally new to me, but how to describe the mysterious something stirring my soul so deeply and kindling the passion that kept me in the river all these years?

It often takes time to name things or to penetrate the deepest reality of life. I feel poignancy includes that level of meaning: the hesitation, the wondering... The “Is it possible? Can there be such beauty/pathos, freshness/decay, light/darkness? Poignant, from the French poignard, dagger, hints at the heart, and we know how many tones of feeling it exudes! “(Poignancy) also specifically implies a power to pierce the mind or heart so that the reader, hearer, or observer feels acutely as well as with aesthetic pleasure the emotion aroused...” (Merriam-Webster Dictionary of Synonyms.)

My earlier installations were more representative of my outer experience. Not unlike a scientist, I tended to display the artifacts of my work in the river. I had shown the many gifts, especially the children's shoes in prior exhibitions, but now I was ready to share my vulnerability: How one pair of little Mary Jane shoes - white, the leather of their tips worn, abandoned on a sandy patch - affected my core. How that one find opened me up to a transmission of the future. How little children, the children of the world, their innate perfection, the suffering they endure in poverty or war touches our own inner child. How this dual aspect of child became central to my work.

Yes, there was suffering and darkness, but there was also undeniable beauty. For a river that had no water to speak of running through it (the Santa Fe River was named the most endangered river in America in 2006 by the American Rivers Associations,) there were all kinds of little miracles for eyes to see. The green shoots that sprout under the rotting newspaper readying for their journey upward. The new-born snake nestled in the hollow of a dead tree. The miracles were sometimes mysteries of a synchronous nature like finding a copy of the book of “Black Elk Speaks” when a class from the Indian American Institute of Art led by their art teacher Shelley Horton-Trippe came to see and experience my performance. There were numerous encounters that provoked serious meditations, like a statue of Jesus laying in the grass of the bare river or the plastic bags filled with sand looking like glistening body parts, equally eerie and intriguing. What I discovered about my river journey was that both darkness and beauty (in all their shades) were always present. Remembering the pain of the Earth had prompted me to be an artist and knowing that pain and grief had been the hallmarks of my life, this was a major realization that, in the long run, brought me much healing.

To mark my 30-year quest on the topic, I recently wrote a piece titled “What is the Spiritual in Art in Our Time” (see http://dominiquemazeaud.blogspot.com/.) Over the years I noticed that artists and critics have attempted to define the new kind of art being born at this time by giving it specific names. A couple that struck me were “The Aesthetics of Participation” and “Relational Art”, which certainly describe aspects of my work. I don't know if “The Aesthetics of Poignancy” will take hold. The main thing is that it speaks to me. Delving into the meaning of poignancy and its relevance in my path of art is a blessed seed that is growing and taking root, and for that I am deeply grateful.

In 2005, Bill McKibben, the author, educator and world climate activist wrote an article titled “IMAGINE THAT/What the warming world needs is art, sweet art...” At the time, I could not quite get the 'sweet' component of the title. Today, rereading the article I clearly seize upon a particular sentence, “To document the buzzing, glorious, cruel, mysterious planet we were born onto, before in our carelessness we leave it far less sweet...” My new understanding of dukkha resonates so much better, when I understand it within the context of a poignant perception of the suffering Earth.
Posted by Dominique Mazeaud at 8:31 AM No comments: 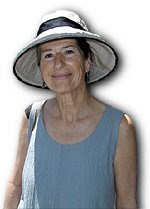